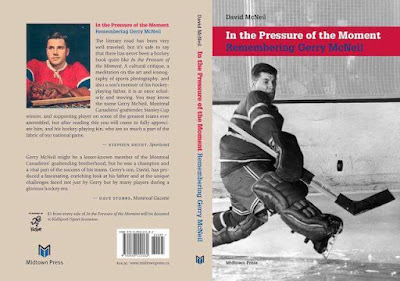 One of the special guests was David McNeil. His dad, Gerry McNeil, was between the pipes for the Montreal Canadiens when Barilkno scored at the 2:53 mark of overtime in game five.

David McNeil has written a book - In the Pressure of the Moment - Remembering Gerry McNeil - about his dad's life and career in hockey.

Gerry McNeil was born on April 17, 1926, in Quebec City. He played for a brief time in 1943-44 with the junior Montreal Royals and in that same year graduated to the senior Royals. While with the Royals in 1947-48, he got his first taste of NHL action when the Montreal Canadiens called him up for two games. McNeil lost one game and tied the other.

Late in 1949-50, Montreal once again summoned McNeil, who was playing for the Canadiens farm team in Cincinnati. In six games, McNeil sparkled, posting a 3-1-2 record with a 1.50 goals against average. His performance helped Montreal's starter, Bill Durnan, win the Vezina Trophy.

The following year, McNeil became the Canadiens number one goalie and was in the net for all their games over the next two seasons. In 1953, he became a Stanley Cup champion. He left the Canadiens after the 1953-54 campaign and the reason for his departure is one of the many wonderful stories in the book.

Other than a brief return to the Habs in 1956-57, McNeil spent the rest of his playing time in the minors.

Before David addressed the crowd, I chatted with him about writing the book and his dad.

On what motivated him to write this book: Well, I sat down with my dad in the 1990s and knew he wasn't going to be around forever and I wanted to get the stories. We started watching games together and we noticed there was a big difference between our experience of the NHL even 20 years ago and what fans experienced in the early 50s. My book became not just the story about my father, but a history about sports media. I had a lot more material than I could get into one article, so I always knew I would be working on a book. I had a few false starts and it took time, but I persevered and didn't quit. I had a contract to publish it as my father was dying. After he died, I finished the manuscript and sent it to the publisher. The publisher called me and asked, 'you know the guy that signed you to that contract?' I said, yes, 'well we fired him, he was totally incompetent and he signed a whole pile of guys to contacts that could never produce the material we want. I've looked at your manuscript and we have strict criteria for our sports biographies series and your manuscript will never fit in.' That was the end of that. Then, Ken Dryden's book, The Game, was reissued on its 30th anniversary and then, Todd Denault's book on Jacques Plante came out. So the timing wasn't just right. I had to sit and be patient. With any writing or creative project, it's not over until you say it is over. I held on and along came Louis Anctil a Vancouver publisher. He thought this would be a great project. We teamed up and made it happen. I'm really happy that I hung in there. My father would have said to me, 'you only have one choice, you can try and make it better.' I've spent 20 years trying to make it better. I'm pretty proud now of the final product.

On things he learnt about his dad that surprised him: I couldn't believe the positive press he got. I teased him once that he must have witnessed Elmer Ferguson and Dink Carroll murder somebody because I can't believe the things they said about you. It is kind of unqualified praise and admiration. If he had a bad game they ignored it. That was one thing that surprised me. The one thing that didn't surprise me so much was that he was a really team player. He'd do anything for his teammates. He once covered up for Dollard St. Laurent. It was a story that didn't get into the book. Dollard coughed-up the puck once in front of the net and it led to a goal. Dick Irvin didn't get the number of the player and the sports reporters wouldn't help him out with who it was. So he asked my father. He told Irvin that he wasn't going to tell him. Irvin said, 'Gerry you think about it, we got a practice at nine o'clock tomorrow morning and I'm going to ask you again and you better tell me.' He slept on it and the next morning there's practice, but nothing is said. My father and Dollard exchanged glances and they think Irvin's forgotten about it. Irvin blows his whistle after forty minutes and everybody goes off the ice except for Gerry. Then, Irvin asks, 'okay Gerry who was it that coughed-up the puck?' My father said, 'I slept on it Dick and you know what, I don't think I want to tell you.' Irvin replied, 'okay Gerry you start skating.' Twenty minutes later my father is ready to collapse. Dollard comes out of the dressing room and my father waves to him to get out of there as he's going to blow it. Then, Dick blows his whistle and says, 'okay Gerry give me the name.' My father looked at him and said, 'I'll never give you the name.' That was the end of it. Dick knew my father had to play the next night, so he couldn't kill the guy. My father and Dollard shared this story on the golf course around the year 2000 and I was there. You could tell Dollard still appreciated the fact my father sucked it up for him. My father said he was the beneficiary because the next game Dollard St. Laurent was all over the place getting every rebound and taking everybody out. That was one thing that distinguished him from his successor, Jacques Plante. He was a great student of the game, but he would also be critical of a defenceman who wasn't in position. He was probably right, but it didn't endure him to his teammates. My father throughout his life knew he had the respect of his teammates and I think that really was all that mattered to him. He didn't want public accolades or the trophies. He was quite happy winning the last Vezina for Bill Durnan when he came in at the end of the 1950 season and improved Bill's goals against average. His own average for those six games was 1.50. That was perfectly in keeping with his character of trying to do something for somebody else.

On what was the hardest part about writing the book: Some of it was emotional right from the beginning. We weren't going to write a whitewash. This had to be about my father's flaws. My father wasn't a perfect individual. He overcame challenges later in life. He overcame problems with alcohol and homophobia. We were more proud of him for that actually than we were for his winning the Stanley Cup. It really made for a great family dynamic. That was a little difficult (to write about) because you know if my dad was alive I'm not sure if the book would have gotten written the same way. In the end it was a good positive story about Gerry, but not one he would have wanted to see.

On how his dad dealt with pressure: Not well, the Leswick goal in 1954 is an example (Detroit's Tony Leswick scored in the overtime of game seven in the Stanley Cup Final. The goal was scored when Doug Harvey stuck out his glove in an attempt to knock the puck out of the air. Instead, he redirected the puck and it found the back of the net). The quick version about the pressure and how he dealt with it is that he didn't sleep that summer. He kept thinking if I was standing an inch further back that the puck would have hit me here and who knows we could have won the seventh game in overtime. That is tough one. Especially, with Doug Harvey, he was the one guy my father said as soon as he came out onto the ice he would breathe a little easier. Harvey played professional baseball, so if anyone is going to knock the puck out of the air it's going to be Doug Harvey. They never discussed it afterwards. My father had trouble sleeping and when he did fall asleep around four o'clock he would dream about that goal. He had decided he was going to quit earlier in that playoff run because of a fight with Dick Irvin. He promised himself he would never play another game under Dick Irvin and although he missed out on those five Stanley Cups (Montreal won between 1956 & 1960) he took personal pride in the fact he kept his promise to himself. He never did play another game for Dick Irvin. But he didn't let the team down as he finished the series.

On having a dad who played in the NHL: What I remember is that he got stopped by strangers and they would ask, 'coma sava Gerry?' We would lose 15 to 20 minutes. He would indulge people he hardly knew. He would fake his way through the conversation. I figured it out. He would ask about their children and the other person would be moved that my father would remember. But he wasn't really remembering, he was faking his way through it. He had a lot of time for people. He carried his celebrity well. I was too young to ever see him play in the NHL. I knew my father as a sales representative and a good father.

In the Pressure of the Moment - Remembering Gerry McNeil is full of rich stories and chapter four - The Goalie in the Barilko Picture - will be of  particular interest for Maple Leaf fans. The entire book will be an interesting, informative and fun read for all hockey fans 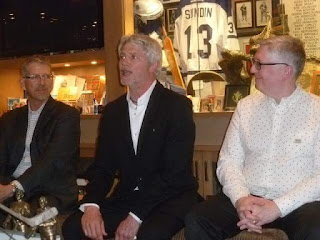 The above picture shows David McNeil sitting between Dan Donohue (L) and Kevin Shea.  This picture was taken during the Q&A session after the presentations. Dan Donohue spoke about his family and how they came into possession of the puck Bill Barilko used to score against Montreal in the overtime on April 21, 1951. Author and hockey historian, Kevin Shea, who wrote an outstanding book on Barilko (BARILKO without a trace) talked about Bill Barilko's amazing hockey career and his very sad passing in August 1951.

BOB GOLDHAM OUTSIDE THE GOAL CREASE

Always looking for a good story. A fan of hockey then and now. Member of the Society for International Hockey Research. Author of Bob Goldham Outside the Goal Crease.